It's hard not to be moved by the words of the boy in Gaza as expressed in the video below, living in a war zone not of his making and facing a miserable and uncertain future. So when major conflict breaks out, as it did between 6th–21th May 2021, it's indiscriminate; in that period some 256 Palestinians were killed in Gaza and 2000 wounded, many of those deaths (58) and injuries (366) inflicted on children. (12 Israeli civilians were also killed in that period and 114 injured. 1 Israeli soldier was killed, and three injured.) Not only do these children grow up with the constant threat of death, always alert to the terror of sirens and sudden explosions, basic amenities such as a secure water supply are also non-existent with the Euro-Mediterranean Human Rights Monitor and the Global Institute for Water, Environment and Health (GIWEH) in 2021 stating that 97% Gaza's drinking water is not drinkable being below minimum health standards for human consumption.

Not only that, but the Gaza Strip is effectively under an Israeli blockade and, although Gaza has a coastline, that blockade is also by sea despite the UN considering that to be a denial of basic human rights and a contravention of international law. This affects daily life on every level from ensuring adequate food supplies, education, electricity, health and the maintenance of essential services such as sanitation infrastructure. Gaza's electricity supply itself comes from two sources; Israel's electricity company, which supplies power through ten lines and the Gaza Power Plant which has been bombed multiple times by Israel leaving its output far below the basic needs of the area. Israel can effectively choose if and when the area can have access to power, often limiting it to just six to eight hours each day and rarely during the evenings making it hard for children to study and exacerbating the humanitarian situation in Gaza; a situation described by Antonio Guterres, Secretary-General of the United Nations, in 2021; "if there is a hell on earth, it is the lives of children in Gaza." 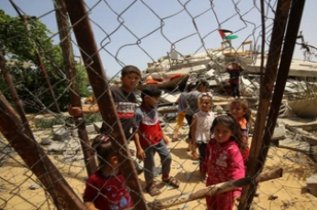 There are some one million children living in the territory including 22,000 orphans. A study conducted in 2020, before the 2021 conflict, found that 53.5% of them were suffering from PTSD and nearly 90% had experienced personal trauma. This in a territory where the future is already bleak with 53.7% in the strip unemployed (one of the highest rates in the world) and youth unemployment even higher at 60%, leaving 80% of the Strip's population reliant on some form of humanitarian aid. This has inevitably impacted on life for children in Gaza with increasing school drop-out rates, children engaged in labour to survive, substance abuse and early marriage. As one aid worker stated, "Young children aren't spending enough time playing, which is central to healthy growth. They aren't building social emotional skills with their peers. Their lives are defined by fear, often concerning the safety and permanence of their caregivers." 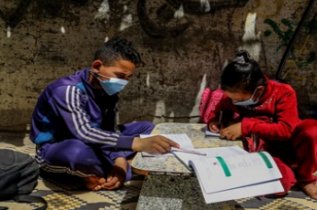 During the 2014 Israeli attacks on Gaza, 252 schools were damaged with seven being entirely destroyed and it is estimated that a further 200 schools are required to meet the need sof the growing population however Israel has imposed retrictions on importing building materials. As such, the high number of students and limited schools places, means most schools now run a two shift system - morning and afternoon - to accommodate the students. The education system itself comprises compulsory basic education from Grade 1 to 10 (divided into the preparatory stage ~ Grades 1 to 4 ~ then the 'empowerment stage' ~ Grades 5 to 10). Secondary education (general secondary education and a few vocational secondary schools) then covers Grades 11 and 12. One girl, who normally arrives at school already hungry because her family can't afford breakfast, commented on the situation, "We have drinking water taps in school, but the water is contaminated so I avoid it. My class is overcrowded – there are 44 pupils crammed into one room. It is difficult to hear what the teacher is saying and it is hard to concentrate. My desk and chair are also old and broken." Further education opportunities are also limited as the young people are denied permission by Israel to leave Gaza to study in the West Bank or elsewhere even if they have already obtained a visa to travel internationally when there's no program in Gaza for their field of study. Despite this, many children in Gaza continue to demonstrate great skills and talents, a determination to learn and succeed despite the odds.

Of course children in Gaza play like all others. Often its flying kites, mucking around on the beach, and, of course, football but many of their games in the bombed out streets are war games with pretend guns and rocket launchers even pretend torture and interrogation. And that's what they have to play with because there's nothing else. As one ten year old stated, "All that's left is sand. If they could have destroyed the sand, they would have destroyed that too." 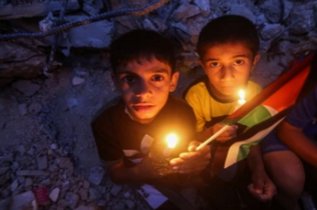 Here at Child Sponsorship we are not making a political judgement about the situation in the Middle East but its not hard to conclude that children in Gaza who have been brought up in misery, fear and poverty with poor educational opportunities will find it hard to find peace either emotionally or with their territorial neighbours as they mature into adults. Bleow are some projects and programs working with children in Gaza you may choose to support.