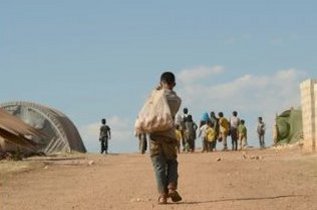 It perhaps could only have been hoped that after centuries of warfare, none worse that the twentieth century that saw tens of millions across the world killed, injured or maimed with entire countries reduced to rubble, mankind could have entered the twenty-first century having learned lessons from its past with a determination to carve out a better furure for all regardless of race, religion or creed. Yet here we stand in the opening decades of that new century with 1.6 billion children (2019) living in a conflict-affected country, a child dying from hunger every 10 seconds, that's 3.1 million children a year (UNICEF), an estimated 5.7 million children under five on the brink of starvation across the globe with the world facing the biggest global hunger crisis of this century so far and now a new war in Europe forcing millions to flee their homes in the face of an advancing hostile army that is bombing indiscriminately.

All of these situations have one thing in common; none of them were caused by children who, as ever, remain the victims of adult failure through action or inaction. Perhaps it is therefore unsurprising that suicide is the fourth leading cause of death among 15-19 year-olds with almost 46,000 children between the ages of 10 and 19 ending their own lives every year – about 1 every 11 minutes. On this page we publish details of all the latest children's charity appeals with a focus on emergency humanitarian aid. Please do what you can to lend your support.


There are other children's charities that we support and would encourage you to visit their websites to find out more about their work and what you can do to support them:


Main sections of this site: